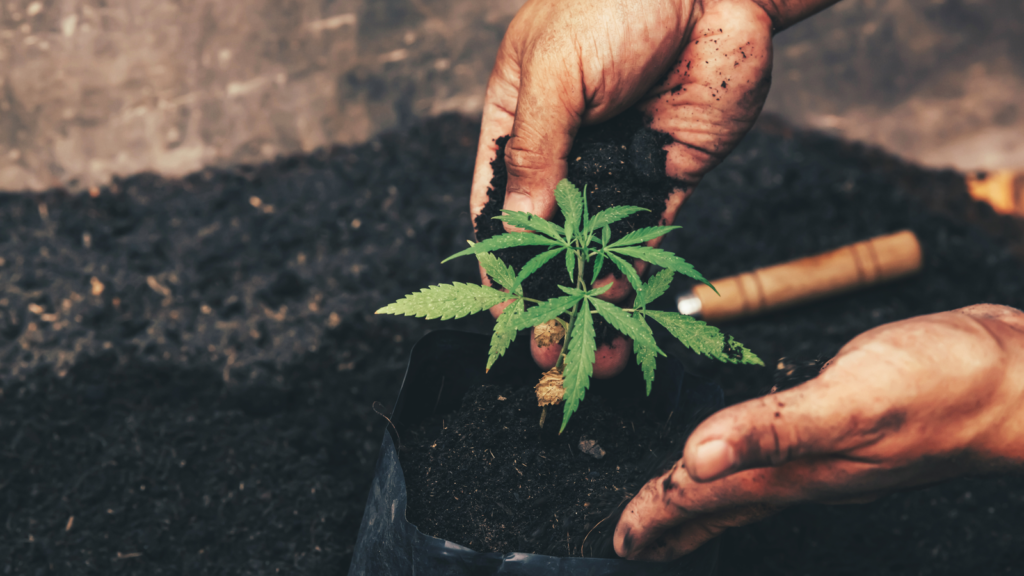 Marijuana stocks are losing steam after soaring to record highs in response to Joe Biden becoming President of the United States. Many hoped that, with Democrats gaining control of the White House and Congress, cannabis reform would become a priority. On Feb. 27, Virginia lawmakers even greenlighted legislation that would legalize recreational marijuana by 2024. However, other than that, news of legalization has dried up.

That lack of traction has been brutal for Canadian cannabis stocks. It’s no mystery that companies in Canada are looking to the U.S. as the tonic for their ailing returns. The Canadian market has seen some essential bubble-bursting in recent years. But there is still a danger of overvaluation. Hence, marijuana stocks remain highly dependant on the future of America’s pot market. To put things in perspective, the entire Canadian cannabis market is dwarfed by California alone in terms of sales. 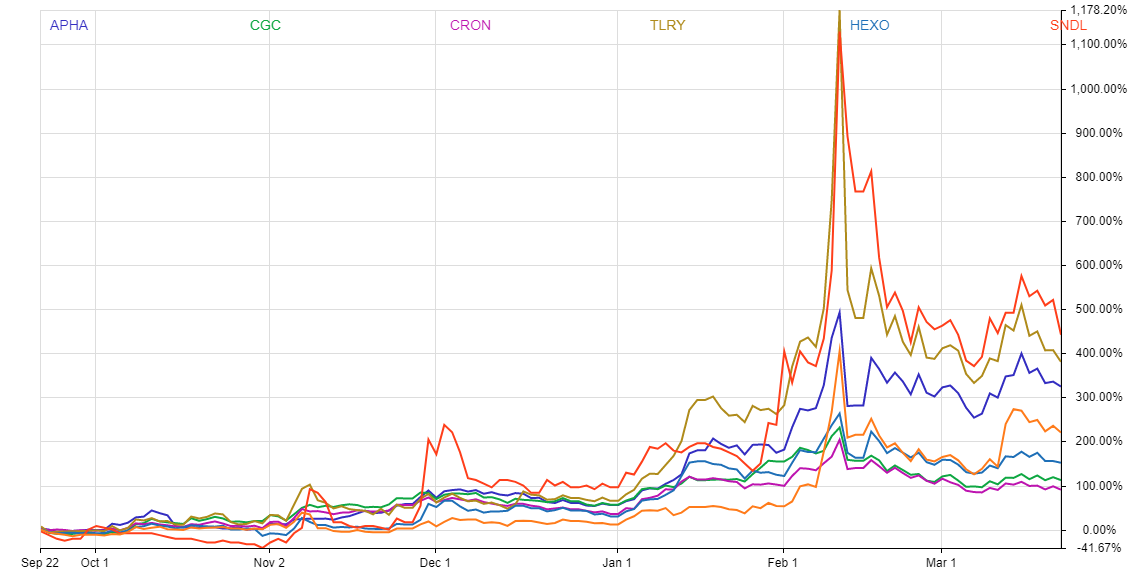 In short, Canadian marijuana stocks are looking for President Biden to make a move. In the run-up to the inauguration, every one of these names gained steam. But, as you can see from the chart above, things are starting to get back to normal. Until legalization happens, they can do little to compete with an illegal market that operates far more efficiently.

So, let’s check in with these seven pot stocks as they wait for some positive news from the White House.

Last year, two of the biggest Canadian cannabis companies — Aphria and Tilray — agreed to merge and create the world’s largest global cannabis company. Tilray will survive the merger and continue trading on the Nasdaq under the “TLRY” ticker. But we’ll talk more about the surviving entity separately in this article.

At this point, Aphria’s share price is trading at approximately 0.78 times Tilray’s share price. In the run-up to the merger, investors can take advantage of the arbitrage opportunity through purchasing APHA stock and shorting Tilray stock.

On its own, this pick of the marijuana stocks has not been doing well. Data shows that the cannabis producer has disappointed analyst expectations for three out of the last five quarters. Despite the negative performance, though, shares jumped 149% in the last three months. You can chalk that up to the upcoming merger.

The company is still struggling from a fundamentals perspective, with return on equity and net margin in the red. After absorbing its assets, perhaps Tilray can do a better job.

Another one of the marijuana stocks that’s struggling these days is CGC stock. When I wrote on the company previously, I underlined its solid balance sheet and prospects. I still like those things today. However, the stock has already increased 130% in a year. This is largely due to the prospects of Joe Biden relaxing federal pot regulation.

Since there is limited traction on that end, though, the stock has been giving up ground. InvestorPlace‘s Chris MacDonald wrote an excellent article that summarizes the reasons why Canopy has done badly recently. MacDonald highlights several factors, but the ones that stick out are high operating costs, a focus on the ailing Canadian market and a lack of positive U.S. catalysts.

Analysts offering projections on CGC forecast revenues to increase steadily in 2021 and 2022. However, I would prefer pouring capital into the company’s parent, Constellation Brands (NYSE:STZ), a multi-category supplier of alcoholic beverages with brands including Corona and Modelo. I believe SZE is a more stable investment than Canopy — it’s more diversified and gives you exposure to the marijuana play, too. 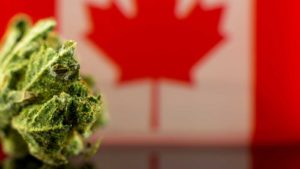 If you read the views of several analysts on InvestorPlace, they have a decidedly negative outlook on Cronos Group. It’s not hard to see why, though. One look at the company’s financials and it’s clear that this cannabis play is in trouble.

In announcing its results, however, the company highlighted its Israeli business efforts as a silver lining. Cronos sells its Peace Naturals brand in the Israeli market and is currently working on using marijuana in skincare products. This is part of the Cronos “Cannabis 2.0” strategy, where the company uses cannabis to manufacture other products.

Currently, CNN Money tracks nine analysts offering consensus estimates on the company. According to these forecasts, shares have a median price target of $7.90 per share, a 15% discount to the current price. All things considered, this pick of the marijuana stocks really needs some positive news regarding U.S. federal legalization in order to do well in upcoming quarters.

Next up on this list of marijuana stocks is TLRY stock. Of course, we have already discussed the mega-merger between Aphria and Tilray. But from the Canadian pharmaceutical and cannabis company’s perspective, this merger will be complicated.

One thing we know for sure is that the stock will drop in the run-up to the merger. However, putting the merger on the backburner, the company itself has been in trouble for a while.

Tilray’s bright spot, though, is its Manitoba Harvest subsidiary — a company focused on the hemp-based foods business. It has been doing well and is contributing substantially to TLRY’s topline.

However, a combination of weak liquidity and cash burn as well as the overall state of the Canadian cannabis market are reasons to avoid this stock for the time being.

Our next entry on this list of marijuana stocks is a puzzling one. By most measures, HEXO stock is a better cannabis play than most.

For instance, in the second quarter of fiscal 2021, the cannabis producer managed to achieve positive adjusted EBITDA, making for the “seventh consecutive quarter of adjusted EBITDA improvement.” That adjusted EBITDA grew by 94% from the prior-year quarter and 12% from Q1 of 2021. However, the stock still fell slightly after the earnings report, with an earnings per share (EPS) loss worse than what was expected by analysts.

This is not exactly new territory — the company has disappointed analyst estimates before. True, the loss was coming down in previous quarterly results, but the latest quarter reversed that trend. And if you couple that fact with a massive run-up in the share price — 118% over the last one year — you have all the makings of an overheated stock.

All in all, Hexo has fallen 10% in the last month, but it needs to fall more for it to become an attractive investment.

Several new investing strategies have emerged this year. However, none have been as amazing as the recent volatility in Reddit-fueled meme stocks. Several stocks that were dead in the water now have a new lease on life. One of those names? SNDL stock, which has used that opportunity to issue a massive amount of shares and take advantage of the skyrocketing price.

Overall though, despite Redditors pushing the stock up, the cannabis producer remains highly stressed. Sundial’s gross margin, operating margin, net margin, return on assets and equity return are all poor. Sales also increased just 11.5% in the last year, at a time when even the most stressed cannabis producers have managed good growth rates.

So, unless the U.S. market opens up, this pick of the marijuana stocks will continue to struggle. Reddit’s r/WallStreetBets forum can only help so much. 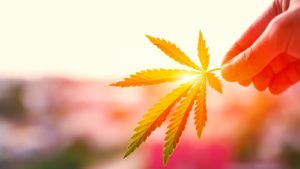 Much like Sundial, Organigram is also classified as a meme stock, alongside names like GameStop (NYSE:GME) and AMC (NYSE:AMC). What’s more, like other marijuana stocks, this cannabis company is suffering on all counts. However, the OGI stock price doesn’t reflect this situation at all. In fact, OGI has outperformed the S&P 500 by some 40% over the past one year.

That said, though, sales have dropped in the last year. Like our last entry, Organigram’s gross margin, operating margin, net margin, return on assets and return on equity are all poor. According to CNBC, OGI experienced only one earnings beat over the last six quarters.

Yet, despite this, the stock is trading at a forward price-to-sales ratio of 14.36. To sum up, OGI stock is overvalued with weak operating metrics. Without positive catalysts in the States, it will continue to struggle for the foreseeable future.

On the date of publication, Faizan Farooque did not have (either directly or indirectly) any positions in the securities mentioned in this article.

Faizan Farooque is a contributing author for InvestorPlace.com and numerous other financial sites. Faizan has several years of experience in analyzing the stock market and was a former data journalist at S&P Global Market Intelligence. His passion is to help the average investor make more informed decisions regarding their portfolio. Faizan does not directly own the securities mentioned above.